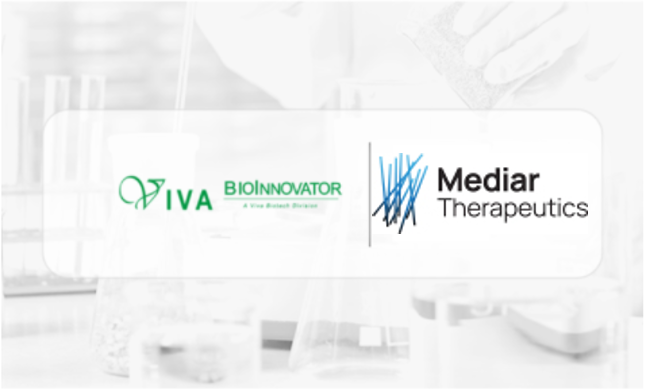 CAMBRIDGE, Mass.--(BUSINESS WIRE)--Mediar Therapeutics today announced Simon Sturge has joined the firm as executive chairman. Sturge brings extensive experience in both large pharmaceutical operations and biopharma startups to Mediar as it advances a novel platform technology focused on the myofibroblast, a cell that is a key driver in fibrosis pathology.

“We are thrilled to welcome Simon to Mediar as we move towards bringing our breakthrough treatments for fibrosis to the clinic,” said Meredith Fisher, Ph.D., founding CEO of Mediar and a partner at Mass General Brigham Ventures. “Simon’s impressive record driving drug development and leading major biopharma organizations makes him the perfect team member to lead Mediar through its next stage of development.”

Most recently, Sturge served as CEO of Kymab, a company developing innovative antibody treatments. He spearheaded the company’s sale to Sanofi S.A. earlier this year for up to $1.45 billion. Prior to joining Kymab, Sturge was the chief operating officer of Merck Healthcare, responsible for the company’s global commercial and manufacturing operations, as well as serving as a member of Merck’s healthcare executive board.

“I’m excited to help lead Mediar into its next stage of development,” said Sturge. “I believe my background developing and advancing novel antibody-based therapeutics at Kymab will be especially helpful as Mediar builds a pipeline of antibody-based treatments for fibrosis.”

Sturge added, “Mediar’s plan to target fibrotic mediators to halt, and even reverse, fibrosis has the potential to transform the way we treat this disease, which manifests in many different forms throughout the body.”

Earlier this year, Mediar announced that Pfizer Ventures and Ono Venture Investment had invested in the firm, bringing the total seed round to $20 million.

Mediar Therapeutics is a discovery stage biotechnology company developing treatments to halt, or even reverse, fibrosis. Our platform and pipeline are based on an emerging class of novel targets – fibrotic mediators – that play key roles in modulating myofibroblasts. These cells are drivers of pathophysiology in diseases such as liver cirrhosis, which can leave organs chronically damaged. Mediar was co-founded by leading fibrosis researchers from Massachusetts General Hospital and Brigham and Women’s Hospital in 2019. For more information, contact info@mediartx.com.